Changing a  Manual Transmission or Clutch

I. Removing the Transmission

Another reason to pull the transmission in a 240Z is to replace the stock 4-speed or manual transmission with a 5-speed transmission from a 280Z.  The overdrive is great on the highway and improves gas mileage. 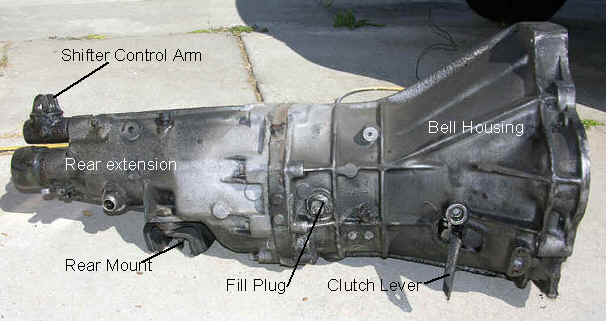 While I am disassembling, I have sandwich bags and twist ties available.  All the parts associated with each task are kept together so they don't get mixed up with nuts and bolts from other disassembly steps.  I use twist ties to hold some parts together, like nuts and washers that go with particular wire connectors, or bolts that mount certain parts.  Some bolts I just thread back in their hole for storage after removing their part. 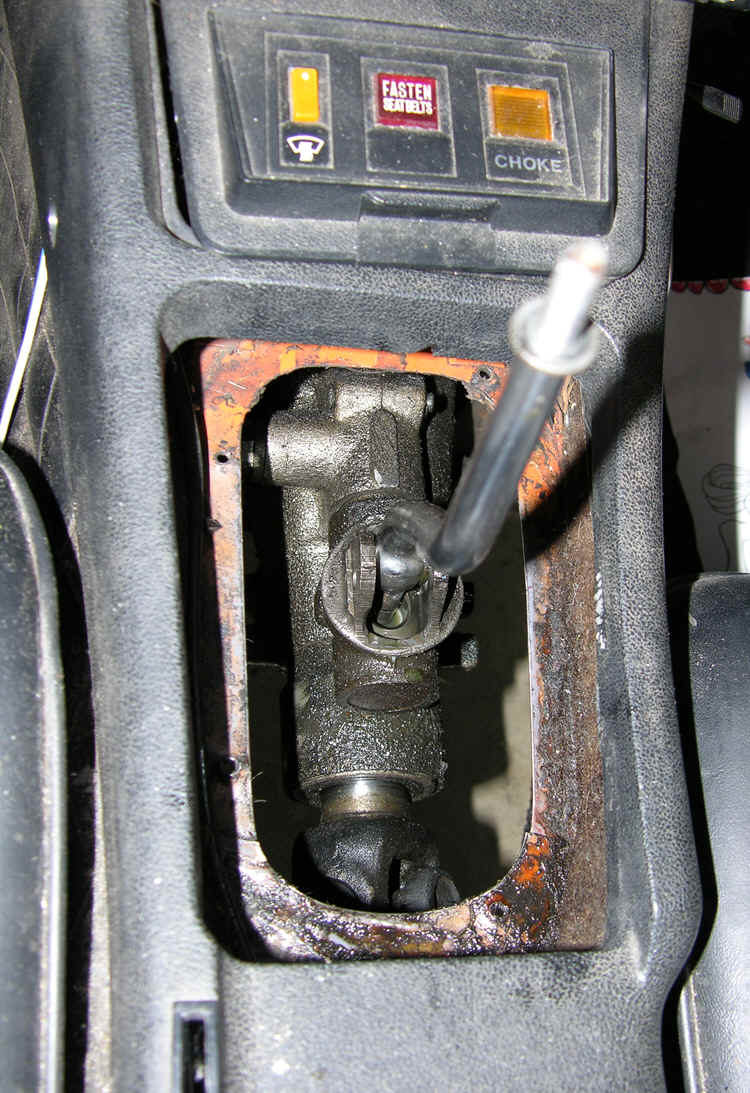 Shifter. Removing the shifter is fairly easy.  Unscrew the shifter grip handle and remove it from the shifter lever.  Unscrew all the mounting screws from the plastic center console.  With these screws out, you can lift the console up to more easily remove and reinstall the parts associated with the shifter.  Remove the clips holding the leather outer boot.  Remove the screws and flange the hold the rubber inner boot.  Pull the small rubber boot off of the shifter control arm.   A C-clip holds the pivot pin on which the shifter pivots.  I have a little hook tool I use to pull off the C-clip  (alternately, there are other fairly cheap C-clip removing tools, or you can push it off with a screw driver or ice pick).  The C-clip is spring loaded and will go flying, never to be found, if you are not careful.  With the C-clip removed, you can push the pivot pin out and withdraw the shifter lever from the shifter control arm.

There are removable plastic bushings that the pivot pin was mounted in.  Inexpensive plastic or brass replacement bushings are available.   You will be happily surprised how precise and tight the shifter can be when worn bushings are replaced with new ones.

Disconnect battery terminal and remove the starter motor.   Remember where all the wires go on the starter or take a digital photo.  Turn out the large mounting bolts, one of which is the main battery ground for the engine and starter circuit.  Shift the starter out forward and drop it down past the frame rails.

Safely raise the vehicle.  Transmission removal and installation are easier if you can get the vehicle up pretty high, e.g., so there is enough room manhandle the transmission and to get it out from under the car.  They always say, "put the car up on jack stands!"   I always do more than that, especially for this job, where you find yourself under the car wrestling with parts and pulling hard on wrenches.  I put the car up high on jack stands, leave the floor jack in place, and leave blocks of wood under the wheels.  Redundant safety. 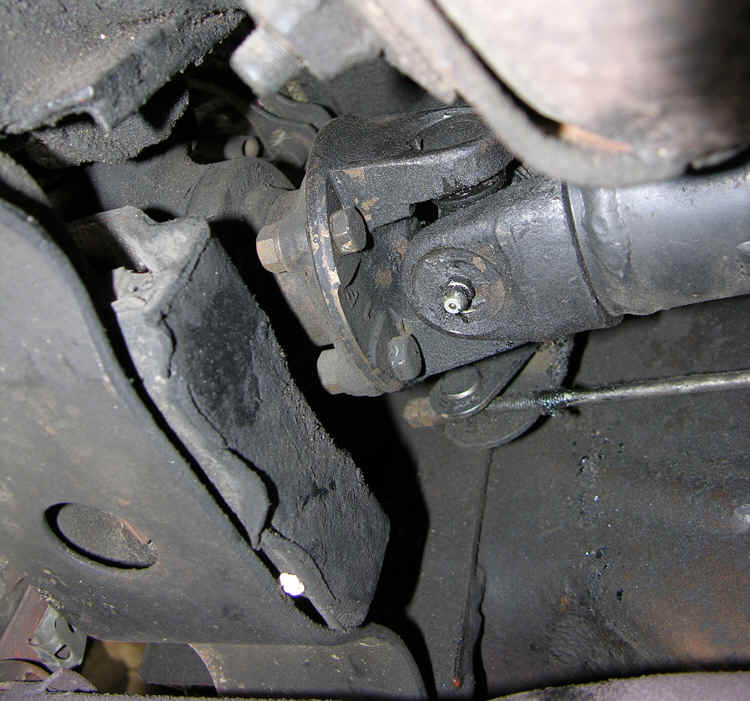 Pulling the Drive Shaft.  Where the drive shaft attaches to the differential, hold the back of an accessible nut with a box-end wrench while loosening associated bolt in fromt with an open-end wrench to remove the first bolt.  With the transmission in neutral and the emergency brake off, raise the rear of the car so that one of the rear wheels can be turned. Turn the wheel so that another nut and bolt will rotate into the position that gives the best access for the two wrenches required to remove the bolt.  Pull the emergency brake so the parts can't turn while you loosen the second bolt.  Repeat the process until all four bolts that attach the drive shaft to the differential are removed.  The drive shaft can now drop from the differential and slide out from the rear seal of the transmission.  Be prepared to catch transmission oil that may drip from the rear end of the transmission.

Remove the two bolts that hold the clutch slave cylinder onto the bell housing.  Twist off the speedometer cable mount to release it from the rear extension housing.  Disconnect the wires associated with the reverse back up light.  Depending on your exhaust system, you may have to remove or loosen the exhaust pipe in order to get the bell housing out of the transmission tunnel. 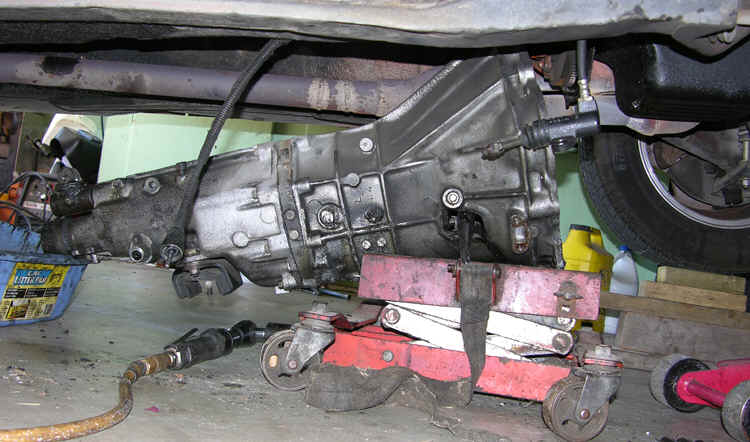 If you take your transmission to a transmission shop, strip everything of importance off it first.  For example remove the clutch fork, throwout bearing, rubber boot from the bell housing side wall, maybe even the plastic gear where the speedometer cable goes into the rear extension of the transmission.  These tranny repair guys strip down the transmission and have repeatedly failed to return more than the basic transmission unit when they are done.   So, you have to put all the little do-dads back on before you install the transmission.  If you have any doubts about the rear transmission seal, now is a good time to replace it.

The job is similar with an automatic transmission, but there are a transmission oil cooler lines, a vacuum line, and such, that have to be dealt with (but, no slave cylinder). 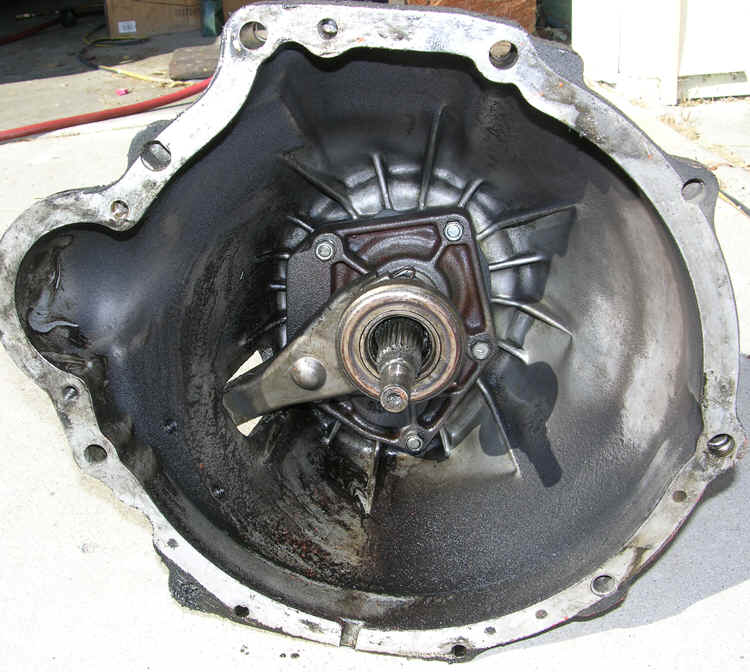