This 1972 240Z is modified for performance. The suspension includes 1 inch front and 3/4 inch rear anti-sway bars, stiffened springs (lowering the body 1 inch), Koni struts, front strut tower brace and a roll bar. The engine is a rebuilt 280Z block (L28), with a 1972 E88 high compression head, an extended duration cam, round top SU carburetors, a 3-2-1 header, a 280Z electronic distributor and a MSD ignition. Power runs though a '78 Datsun 5-speed manual transmission and 3.7 ratio R180 differential. A good old sport car made competitive with a large increase in torque, horsepower, handling and speed. However, this is the story of what goes wrong when performance parts are added without an overall plan. 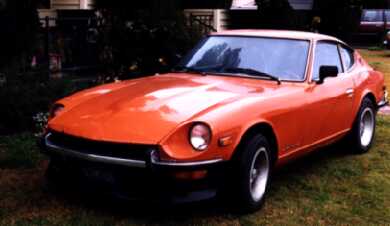 My Orange 1972 240Z/L28 would barely run when I first brought it home. The previous owner was a Berkeley professor who poured money into it through a Z-Specialist mechanic shop. His incremental upgrades overwhelmed various stock parts in the car. The stiff performance suspension had stressed and cracked the frame. The high torque engine burned out the clutch. The increased engine displacement and compression demanded more than the stock carburetors and stock ignition could deliver. The result was bad steering problems, hesitation off the line and a severe knocking problem.

The cracked Frame. The stiff new springs, shocks and roll bar had caused stress cracks in the frame. The cracks became gaping tears near rust holes in one shock tower. The frame rails had hairline cracks all about the roll bar mounting brackets. The left compression mounting bracket snapped back and forth on a scissor-like crack in the frame whenever the car changed direction. The failing compression rod pulled the front wheels out of alignment causing a hard pull to the left. There was a loud clunk sound whenever the compression rod bracket shifted. Estimates for the frame repair were at least $700 with no guarantees ... I decided to buy a nice Lincoln MIG welder for $700 and repair the frame myself.

First, I pounded the sheet metal and frame steel plate into place as best I could. Where frame rail cracks had not spread apart, I butt welded the crack then ground the bead down flat. The welded cracks were then bridged with welded steel plates for added strength. Where the frame rail cracks had spread apart, a long new section of channel shaped steel plate was fit over the existing rail and welded in place. Steel bridges were added at critical stress points to avoid cracking in the future. A large rust hole in the inner wheel well was ground out and spanned with carefully shaped sheet steel. Heavy gage sheet steel was formed to fit after endless rounds of bending on an anvil and chasing (denting) over wood and leather forms. Fit had to be precise for proper welding. The finished work was ground to a smooth surface, primered and covered with asphalt undercoating. No new cracks have appeared after 7 years of hard driving - and I got to keep the MIG welder as an added bonus!

With the frame work completed, the ride was firm, straight and controlled. A strut tower brace was added to further strengthen the front end geometry. This steel rod brace runs just under the hood to tie together the tops of the front strut towers. The added stability in the front suspension improved handling noticeably in hard turns. I added some 15 inch Centerline 5-slot wheels for less shift in turns; looks good too.

The Knocking. Spark plugs normally fire a few degrees before top of the compression stroke (TDC). The air/fuel mixture burns slowly, reaching maximum pressure jut after the piston has begun the power stroke back down the cylinder. Knocking can be caused when hot highly compressed air/fuel mixture rich in air (oxygen) explodes suddenly in the face of a piston still moving up on the compression stroke. The explosion creates a shock wave that can destroy the head, piston parts or head gasket. Knocking is a serious problem for high compression engines. Knocking can be reduced by retarding ignition timing, running a cooler engine, installing a cam with longer duration, running a richer air/fuel mixture and by using high octane fuel.

The Z-Car Specialist that built the engine had retained the 1972 E88 head on the new L28 block in my orange Z. The combination of increased displacement and the small E88 combustion chamber produced a compression ratio of about 10.5:1! Necessary adjustments to other engine components had not been made. The car had a sickly hesitation on starting, knocked under load and also knocked at high rpms.

I found a receipt indicating the previous owner had paid the Z Specialist to rebuild the distributor. When I took the distributor apart, I found the main distributor shaft had been reassembled 180 degrees out of position and one of the retention springs for the centrifugal advance weights was gone. These errors allowed the timing to jump ahead to a very high advance at low rpms. Assembled properly, most of the knocking at low rpms under load went away. Later, I replaced the entire ignition system with a MSD capacitor discharge, high voltage coil and 280Z electronic distributor. To delay and reduce the maximum centripetal timing advance of the ignition, I filled the bottom end of the centrifugal advance weight slide slots with JB Weld. I ground out the slots enough to allow 10 degrees of centrifugal advance instead of the stock 20 degree advance. Timing was set to 10 degrees advance at idle and 20 degrees at speed. This new ignition system gives the high voltage necessary to fire under high compression, easier cold starting, longer time between tune ups and reliable timing at high rpms. Knocking was reduced by having advance start at higher rpms and ending with less total advance.

The fuel system was then adjusted to reduce knocking that remained at high rpms. Excessive oxygen in the air/fuel mixture can cause explosive burning. I replaced the lean 1972 SU carburetor needle/jet sets with richer 1971 model needle/jet sets. An electric fuel pump was added near the gas tank to increase fuel flow through the mechanical pump. The float bowl settings were adjusted up to high normal specifications. I switched to Shell premium gasoline instead of bargain brand fuel. The knocking problem was almost gone. Power and torque were up along with miles per gallon.

When California premium fuel went down to 91 octane, some knocking reappeared. I purchased a slightly raced cam (268 degree duration intake/exhaust) and the knocking disappeared again. The long duration, and significantly increased overlap between closing the exhaust valves and opening intake valves, bleeds off some of the compression at low rpms. The idle is not much rougher and mileage has actually increased. What's more, I noticed a new kick at the end of the power band.

The stock 240Z clutch plate could not handle the torque and would often slip embarrassingly on aggressive starts. It didn't take long before I needed a new clutch. The replacement was a Centerforce® pressure plate and disk. The tires spin now instead of the clutch plate.

Finally, the engine and suspension components are working together. The 2.8 liter displacement and long stroke of the L28 in combination with the high compression combustion chamber give this Z far more torque and horse power than my other Zs. The firmer suspension gives a level more confident feeling in hard corners under power. The performance clutch and 5-speed make her burn and cruise. Fun to drive.