In Datsun 240Zs, there are two common clunky noises that come from the center rear of the car.  The differential has a mount that is two plates of steel sandwiching a thick block of rubber (see, left part of photo, below).  Over time, the sandwich can delaminate so that there is a thud every time you let out the clutch.  The other common problem is when a universal joint starts to go out.  This puts the drive shaft out of balance and you hear a rumble below the cargo area whenever the car is moving under power.  The solution to each of these problems is to simply replace the part.

It is easy to see if a universal joint is going bad.  Raise the car up and secure it on jack stands.  Look at the U-joint.  Often you can see the joint is disintegrating, out of position with plastic debris, metal filings and roller bearings hanging out.  Other times, it is less obvious.  Put the transmission in neutral and twist the drive shaft back and forth by hand.  If there is any movement detected between the part of the joint on the differential and the part on the drive shaft, the U-joint should be replaced. 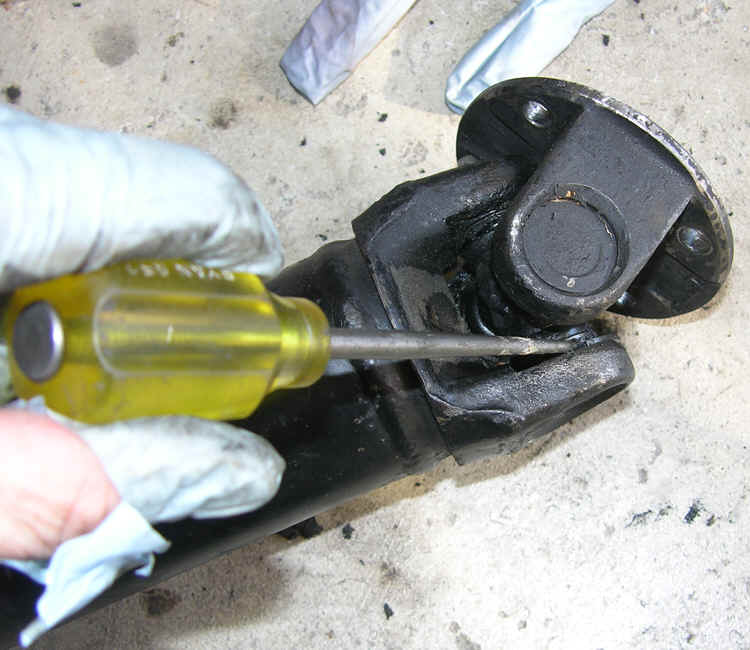 The universal joint is essentially a pair of hinges at 90 degrees from each other, allowing opposite sides of the joint to move in any direction from the axis (two degrees of freedom).  A cross piece extends to a pair of bearings on the drive shaft and at 90 degrees the cross piece estends to another pair of bearings on the differential mounting yoke.

The bearings are held in place in sockets using C-clips held in grooves that prevent the bearings from sliding out of the sockets.  In some designs, the C-clip slips onto the outside of a groove on the cross piece, inside of the bearing socket.  In other designs, I have seen the clip fits into the inside of a groove on the outside of the bearing socket.  It is fairly easy to remove the outside style C-clips, e.g., using C-clip (snap ring) pliers.  I guess there are specialized tools to remove the inside mounted C-clips, but I manage to remove them by setting an awl at one end of the clip and sharply hitting the awl with a hammer so the C-clip goes flying off across the room.  Good thing the new U-joint comes with a fresh set of C-clips. 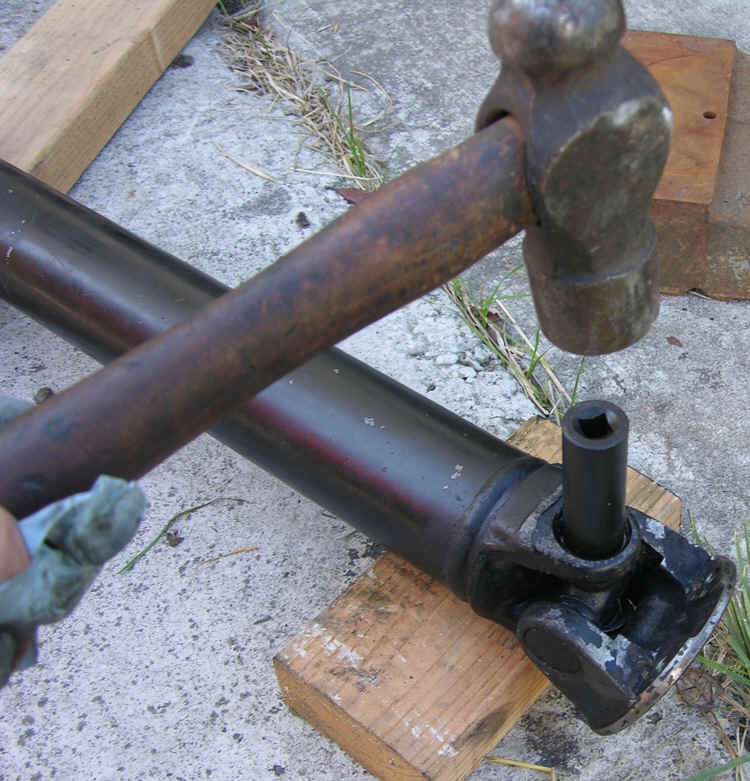 There are many ways to remove the U-joint parts once the C-clips are gone.  In a professional shop, I assume they have an arbor press or hydraulic press to push them out.   I used to force out the first bearing by setting the joint in the open jaws of a 5-inch vice so that one pair of cross piece arms rested across the jaws and the other pair was aligned free between the jaws.  By hitting the drive shaft with a mallet, the top bearing would be forced up and out of the socket.  Another way is shown in the photo to the left.  The drive shaft rests on a block of wood and the first bearing is forced out the bottom by hammering an appropriately sized socket into the top (second) bearing.  Rotate the drive shaft 180 degrees and use the socket to strike the cross piece causing the second bearing to be pushed all the way back in its socket and the other side.  Once both bearings are removed, the cross piece can be maneuvered out from the sockets of the drive shaft. 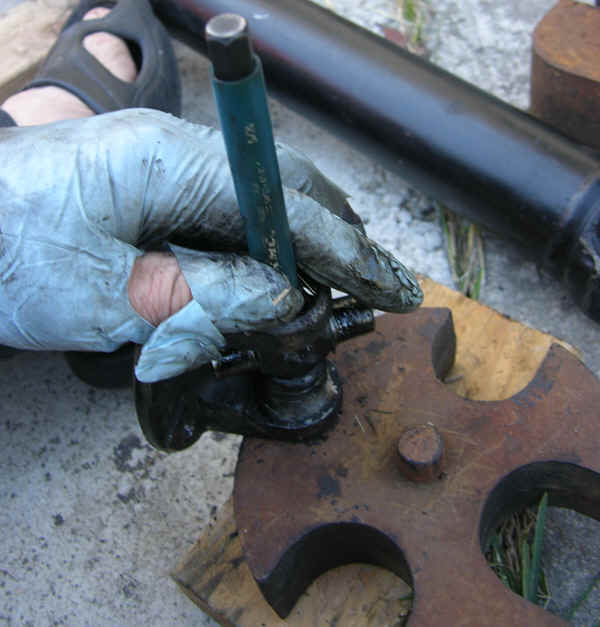 To remove the cross piece from the differential mounting yoke side of the U-joint, rest the bearing socket over a gap in a piece of steel, as shown in the photo, right.   Alternately, the side of the U-joint could be placed across a gap between jaws of a vice, or possibly between blocks of wood.  Hammer a drift (steel rod) into the top bearing to force the opposite bearing out the bottom into the gap.  Rotate the U-joint 180 degrees and hammer the drift onto the cross piece to force the last bearing out of its socket down into the gap.  Now, the cross piece can be easily slipped out of the space between the  empty bearing sockets.

Installing a new universal joint is relatively easy because it is easier to push bearings into the joint than to pull them out.  The main complication to installing the U-joint is that there are a large number of needle bearings in a race on the inside the bearing held in place only with grease when the cross piece is not inserted.  Hold the cross piece in the first bearing as it is hammered with a mallet into its socket in the drive shaft.  Lock the first bearing in place by pushing a C-clip into the groove around the the bearing neck.  Next, you must push the second bearing into its socket and around the second end of the cross piece.  The cross piece can only be in one bearing or the other bearing, but not both, when you first start pushing the second bearing.  It is possible that  hammering could knock loose a needle bearing from its bearing race in a bearing not occupied with a cross piece arm.  So, be careful to not use too much force.  I slide the cross piece back and forth occasionally to make sure the needle bearings all remain in place.  With the second bearing in place, push the C-clip into its groove to finish installation of the first pair of bearings.

Maneuver the second set of cross piece arms into the bearing sockets on the differential yoke plate side of the U-joint.  As before, the first arm should be inserted into the third bearing to hold the needle bearings in place while the bearing is hammered into its socket and clipped in place.  Finally, the fourth bearing was hammered over the last arm of the cross piece, taking care not to knock any needle bearings out of place in the process.  When the last bearing is all the way in, the last C-clip can be forced into its groove and the U-joint is installed. 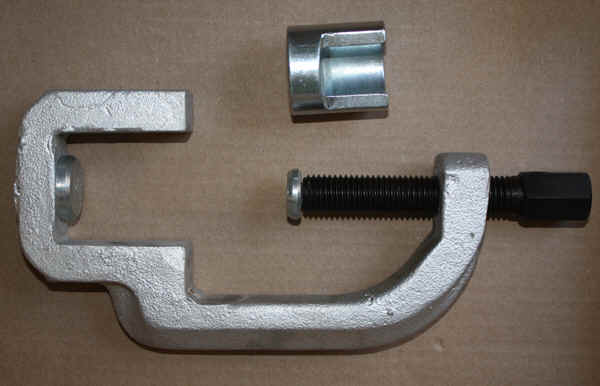 To avoid many of the difficulties of hammering out the bearings, you can purchase a universal joint press (see, photo left).  This tool can press the bearings in and out without shocking the needle bearings out of place.  I believe this relatively low quality tool was purchased on line for about $35.

The replacement U-joints usually include a zerk fitting that you have to install yourself by screwing it into its hole in the middle of the cross piece.  Although the universal joint is already fairly well lubricated as purchased, I pump in a couple squirts of grease until I see a little grease slipping out a bearing seal.  Now, the universal joint is replaced and the drive shaft can be reinstalled.